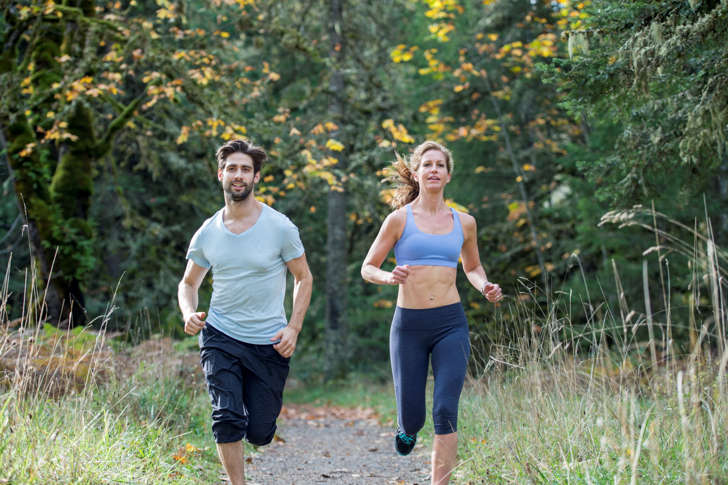 © Christopher Futcher/E+/Getty Images Women can exercise longer than men can before getting tired, a new review says.

Ladies, you now have some science-backed bragging rights: Women can exercise for longer than men before getting tired, according to a new scientific review.

Top Menopause Treatments – Don’t Buy Before You Read This.

It’s not because women are stronger; men are generally more powerful than comparably fit females. But here’s the catch: Women’s muscles tend to be more resistant to fatigue than men’s, which means they can perform at the same relative intensity for a longer duration.

“I may not be able to bench-press the same amount of weight as a big muscle-bound guy, but if you ask us both to perform a contraction at 100% of our maximum strength and sustain it as long as we can, I should be able to outperform him,” explains study author Sandra Hunter, PhD, associate professor of exercise science at Marquette University.

The new paper, published in the journal Medicine & Science in Sports & Exercise, highlights a big problem in the scientific community: Many studies—including many studies on physical activity and performance—are only done on men.

But exercise routines designed for best results in men may not be as well suited for women, suggests the small number of studies that have involved both genders. Hunter reviewed these studies in her paper and encouraged scientists to add to them with their future work.

RELATED: The Best Quick Workouts You Can Do In Just 60 Seconds

“The bottom line of training or rehab is that you have to fatigue a muscle in order to increase its strength,” Hunter told Health. “So if men and women fatigue differently, they should be treated differently.” This is especially important during physical therapy after injuries, surgery, or a diagnosis of osteoarthritis, she adds.

Research has shown, for example, that women retain more strength in their legs after running a marathon or cycling for a long period of time. In other tests, women have been able to hold isometric contractions (think making a fist or flexing a bicep) for longer durations than men, when performed at the same percentage of their maximum strength.

These measures aren’t just relevant in lab settings. “We perform these types of subtle, static contractions all day long,” Hunter says. “They’re important for holding us up, for example, while we’re standing or sitting upright. And we know women can essentially do them for longer than men.”

Gender advantages vary by activity, as well. Women burn more fat and fewer carbohydrates then men during sustained exercise, “which sets them up to perform, potentially for longer periods of time, if they’re going at the same intensity as men,” Hunter says. But they have smaller hearts, smaller muscles, and more body fat than men, so it can be hard for them to keep up with men in a sport like running.

In an activity like swimming, those differences matter less. “Look at Diana Nyad,” Hunter says. “The first person to swim from Cuba to Florida [without a protective cage] was a woman.”

So does that mean we can declare women the tougher sex? “It’s very tempting to say that, isn’t it?” says Hunter. But toughness can be measured in a lot of different ways, she adds, and ladies certainly don’t come out on top of all of them.

There’s also plenty that science still doesn’t know, which is one of the main points of Hunter’s new research. Existing studies do show that women have the upper hand when it comes to fatigability. But they’ve only looked at very specific tasks or specific limbs, she says, and it’s hard to take those findings and make broader assumptions.

The answer, says Hunter, is that more research is needed. Significant progress has been made in the last 20 years, and women are certainly better represented now than they used to be—both in scientific studies and in real-world athletic arenas.

RELATED: Try This Calorie-Torching HIIT Workout From the Fhitting Room

Hunter is confident these performance gaps will continue to narrow as women’s sports programs grow and improve. She also hopes her research encourages a future where each gender’s strengths and weaknesses are taken into account by scientists, coaches, and health professionals. “If we can give women care that’s tailored to them,” she says, “we can really help them reach their full potential.”

Do you have bad workout and diet habits?

Share This Post
Have your say!
00
Previous ArticleMakeup The 15 Sexiest Celebrity Makeup Looks of the MomentNext ArticleThe Heart Disease Risk Factor You Haven’t Been Paying Attention To—But Should